August 17 was Black Cat Appreciation Day – I couldn’t let the day go by without recognizing Simon – a beautiful, solid black panther-shadow who has blessed my life with his presence for 9 years. Formerly feral, he was rescued by my sister and then he came to live with me. 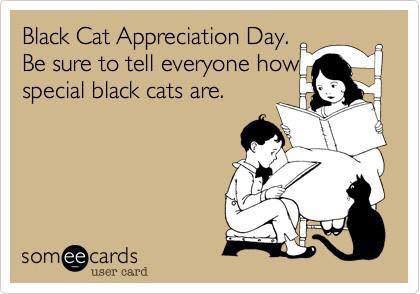 The following was originally posted on Purr and Roar:

Black cats are beautiful, they are mini house panthers, sleek and mysterious. They hold a special place in the hearts of many including myself and Black Cat Appreciation Day is a day to celebrate all things black cat while helping dispell the negativity and myths that still surround them.

Of course today we know better and most people realize that demonizing a cat because of their color is complete rubbish. So what about the benefits of adopting black cats?

What's the View Through Your Eyes?? Cancel reply

Follow The View Through My Aquamarine Eyes on WordPress.com

A River of Words

Thoughts on my spiritual life: Pearls of the Spirit

If it matters to you…

Leave the judgments to God

The Shape of Water

What I Posted Yesterday

Put a Spotlight on it!!